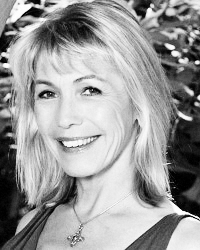 Gunn Espegard was born and raised in Norway.

Born and educated in Norway, Gunn moved to London at an early age to pursue a career as a makeup-artist, graduation from The Shaw College of Beauty with Merit and the Lillian Maund School of Makeup, where she gained a thorough education in the artistry of applied aesthetics.

During her years living in London, Gunn worked mostly for advertising-campaigns and for fashion magazines including Vogue and Harper’s & Queen, and on commercials and music-videos with directors such as Tony Kaye and Russel Mulcahy.

In 1989 Gunn moved to Los Angeles after she received her work-permit as an artist with exceptional skills and talents in her field.
Initially Gunn was working mainly on music-videos (Melissa Ethridge, Prince, Counting Crows, Dwight Yoakam etc.) with directors such as Neil Abramson and Gore Verbinski, and she also worked on magazine-shoots with a number of photographers like Nigel Parry and Veronique Vial etc.
Gunn gradually moved into TV-commercials and has completeed hundreds of commercials with many award-winning directors including Micheal Bay, Brett Ratner, Carolyn Chen and recently Michele Gondry, to name but a few. She is proud to have worked very closely with the director Gerard De Thame for a number of years, and has had an especially long and joyous work-history with director Baker Smith, with whom she has worked since 1993.

In 2011 Gunn was one of a small group selected by legendary makeup artists Ve Neill (3 Oscars) and Nikoletta Skarlatos to work on THE HUNGER GAMES creating the looks for “Capitol City” and she has since been part of the makeup crew on the sequels THE HUNGER GAMES: CATCHING FIRE and THE HUNGER GAMES: THE MOCKINGJAY.

Recently Gunn worked with a select group of makeup artists on JERSEY BOYS directed by Clint Eastwood and due out in 2014.

Other recent credits include Levi’s “Make our mark” campaign for TV-commercials, internet, billboards and print for Vogue, Vanity Fair etc.
Gunn was also key makeup on a short film for Vanity Fair’s “The Decades”-series directed by Gilly Barnes.

Gunn combines life experience with work experience and research skills in order to transform an actor into any character the director may visualize. From classig glamour of the 1940’s movie-stars to contemorary, clean beauty and from the fantasy style of Cirque de Soleil to period Victorian makeup she vill use her skills and imagination to create the image required.